The Gorsch Family, of eleven, moved to Western Avenue, Montville from the Lockyer Valley in 1956. Len, the oldest son, came up several months before the rest of the family to learn about farming pineapples. 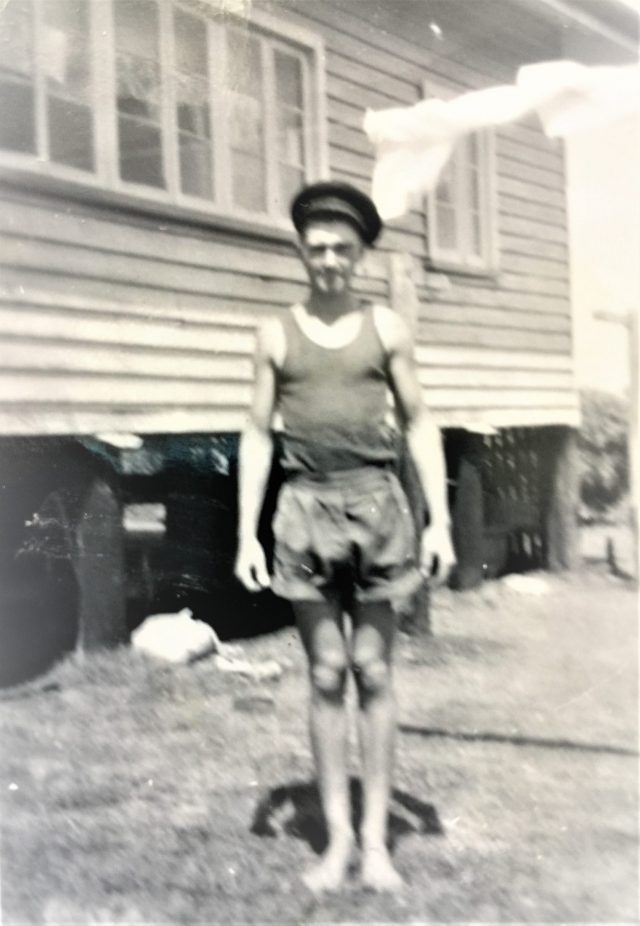 Val Gowlett first saw Len when he was riding his bike down to the shop on the corner of Western Avenue and Main Street. He was wearing shorts, a hat and was a fit, lean 16 year-old. Val and her little sister were walking back from the shop and they were impressed. “I’m going to marry that bloke!” Val said, all of 14 years. Her sister said “I’m going to marry him too” as little sisters were want to do. 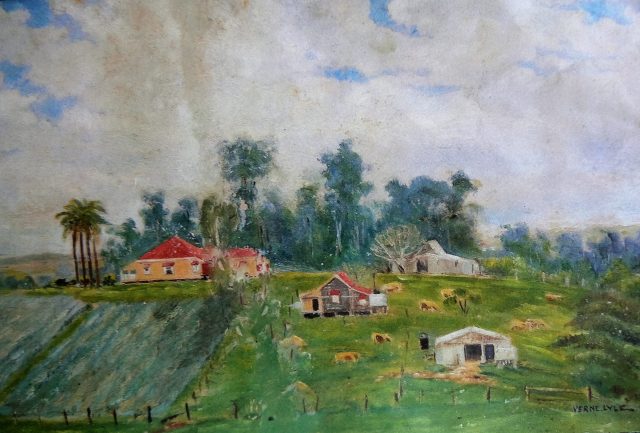 Len didn’t really become aware of his future bride until almost a year later when, in his words, “She bloody-well ran me off the road”. Val thinks that she must have been walking a delivery of strawberries to the Manjalda Guesthouse. The two didn’t actually meet until late ’57 at a card game. The senior Gowletts and the senior Gorschs had begun to play 500 with each other. Now 15, Val got a job at Elston Guesthouse after finishing school while Len worked for Monty Smith four days a week and for Bob Bean one day a week as a farm labourer.

In ’58, Len’s parents left Montville to take up share dairy farming. Len stayed and rented the farm from his parents. For a time, Len’s sister stayed with him but when she left for work on the coast, Len was batching once again. Val was now working in Caloundra Monday to Friday but would come home on the weekends. By ’59, she was cooking meals for Len and doing his washing. They married on 25th May, 1963. 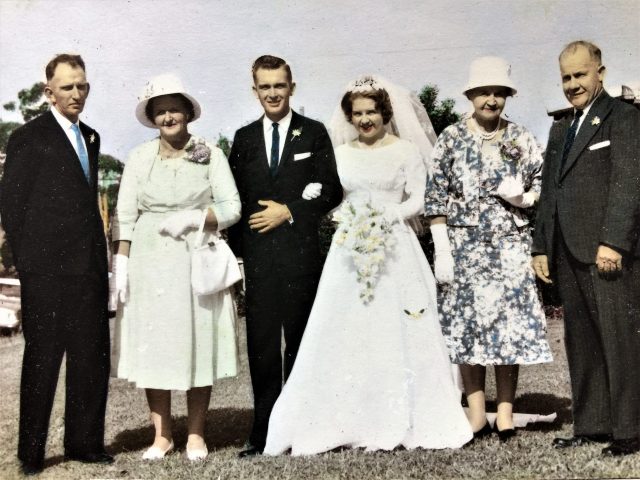 By 1963, Len had his driving licence. An old family friend from Lockyer, Clarrie Bambling, had a small contract plowing/slashing business on the range and asked Len to drive for him. He had two, 2-wheel drive Massey Ferguson tractors – you needed two because one was often needed to pull the other out when it got bogged – and Len became his second driver. Later, he hired a third driver, George Bampton, and he and Len worked week about. As both Len and George also had farms to run this arrangement suited them both. When Clarrie offered to sell the business to either or both Len and George, Len didn’t take up the offer and George bought the business and relocated it to his Palmwoods farm. 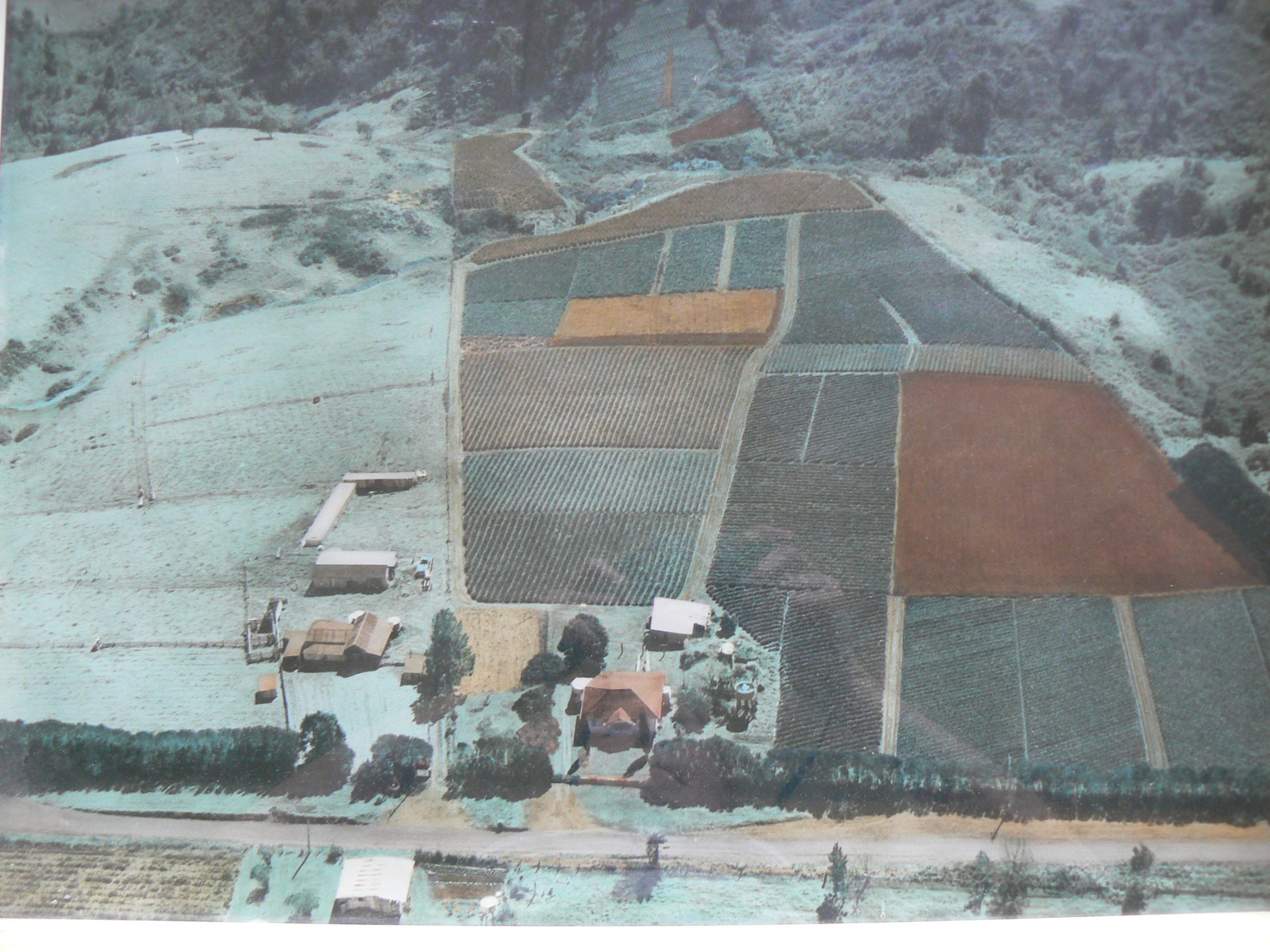 By 1972, Len and Val were able to buy the farm outright from Len’s Dad who was in ill health. Around this time, Len joined Des McCulloch in modifying their tractors to provide Montville with its first “fire engines”. 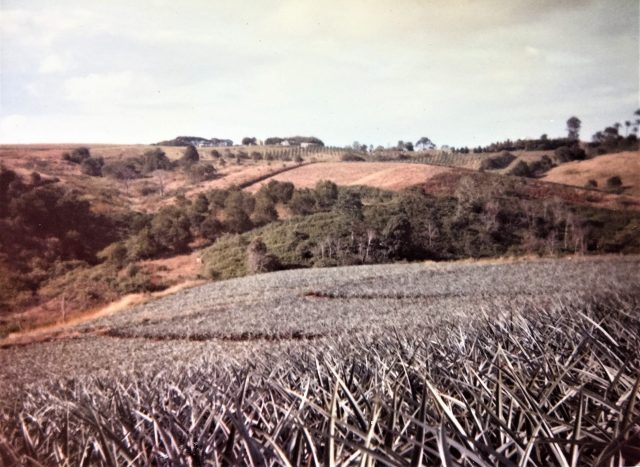 The Gorsch farm with pines

By now, Len was a serious pineapple farmer producing 200 packing cases of fruit for market a week. However, he could see that the market was losing value so began to plant avocado trees between the rows of pineapples. Now wary of monocrop farming, he added custard apples and tamarillos to the farm and phased out pineapples without any dramatic loss in income. For a brief period in the 1990s he became the biggest tamarillo grower in Queensland. He even planted macadamias, but he says that was more for the tax concession offered than anything else. He was shipping fruit regularly to the Melbourne and Brisbane markets and occasionally to the Sydney markets when a stranger talked him into clearing some land for a development he had in mind and changed his life forever.

Ian Russell approached Len in the early 90s to do some preliminary work clearing and levelling acreage that he and Jack Hayden wanted to subdivide. When explained that his little Massey Ferguson wasn’t up to that sort of work, Ian persuaded him to have a go anyway. As Len predicted his little tractor struggled so he investigated getting a bigger one. It was expensive but he was offered a free fortnight trial. Len says he really flogged it – and was impressed. It handled the hoeing and levelling that Ian needed and Len leased it. Unfortunately, it was only 2-wheel drive and reliant on a good braking system to work on steeper Montville slopes. When the brakes inevitably failed and Len almost went backwards over the escarpment, he didn’t hesitate to upgrade to a new tractor with a better braking system. 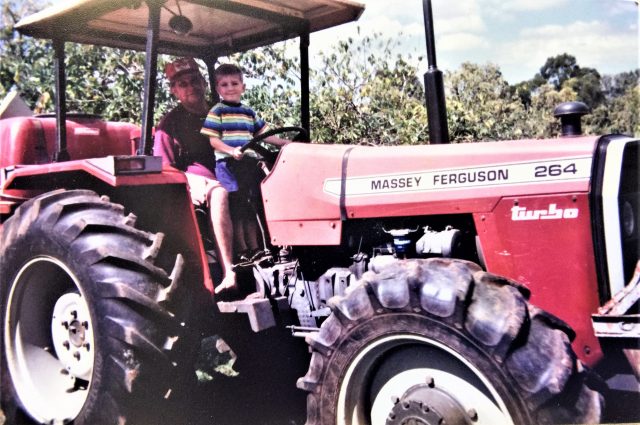 One of many of Len’s tractors over the years

With a bigger and better tractor, Len took up contract slashing seriously. For the next 20 years, Len believes he slashed every farm and acreage property between Flaxton and Maleny. As business grew, he moved on to 4-wheel drive tractors, eventually leasing two and hiring his brother-in- law as a second driver. Ian Russell continued to call on Len to prepare a number of properties he purchased for development along Balmoral Road and in North Maleny. Len recalls a particularly steep, overgrown block behind the Cheese Factory that  was such a challenge that Ian had to help drag out a fence – posts and barbwire and all.

Through this work, Len help clear future subdivisions along Gaden Road, Negus Road and Manley Drive. He was often asked by new residents to clear blocks and was inevitably consulted on how to plant/grow fruit trees. His advice usually came with a free custard apple or avocado plant. By this time, Len had to accept that the farm, that once had provided reasonable income, was no longer viable. Restrictions on spraying, rising costs and falling returns all cut into slim profit margins. However, Len couldn’t imagine a life without fresh fruit and veges so he continued to plant small plots of potatoes, onions, garlic and beans; selling any surplus, along with fruit from his diminished orchard from his packing shed. 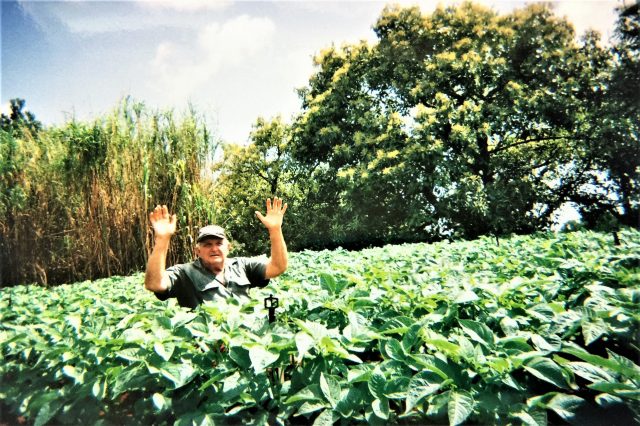 Len in the potato crop 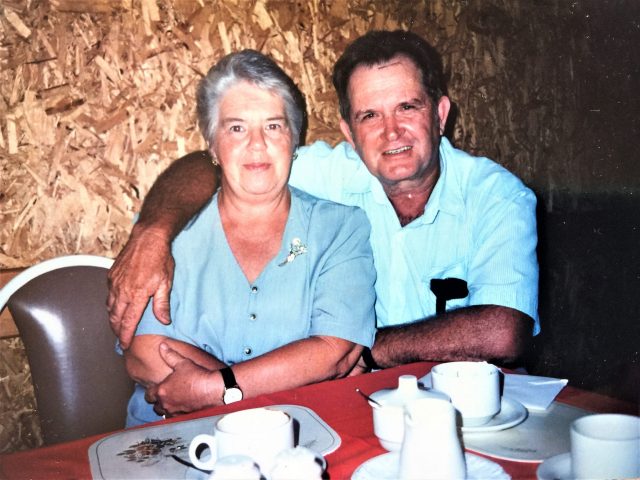 Along with a number of Western Avenue farmers, Len and Val had contracted to sell the back of their farm to a proposed golf development. When this project fell through, they were left with increasing costs and declining income to manage farms which were no longer commercially viable. Len doesn’t do much slashing anymore but if you keep your eyes open and see the shed doors open, call in for some farm fresh spuds and a yarn.