Our family came from England in 1947 as ten-pound poms. My father was a dentist and said that his hobbies were sailing and mountain climbing, so they sent him to Longreach for two years. After a short course at Gatton College, we bought a dairy farm at Imbil that proved unviable, sold up and used the proceeds to purchase a rundown pineapple farm at Mill Road, Montville in 1951.

The timing was impeccable with the price of pineapples collapsing more or less overnight. Montville wasn’t the right place to grow pineapples anyway, producing nice vigorous plants with small fruit. Dad experimented with many crops including beans, custard apples and avocados but none of them made any money so we went slowly broke. As Maleny still didn’t have a high school, they sent me off to boarding school, so Dad had to go back to dentistry to pay the bills. The farm’s financial failure was more than made up for by the wonderful social life they had and the great friends they made. 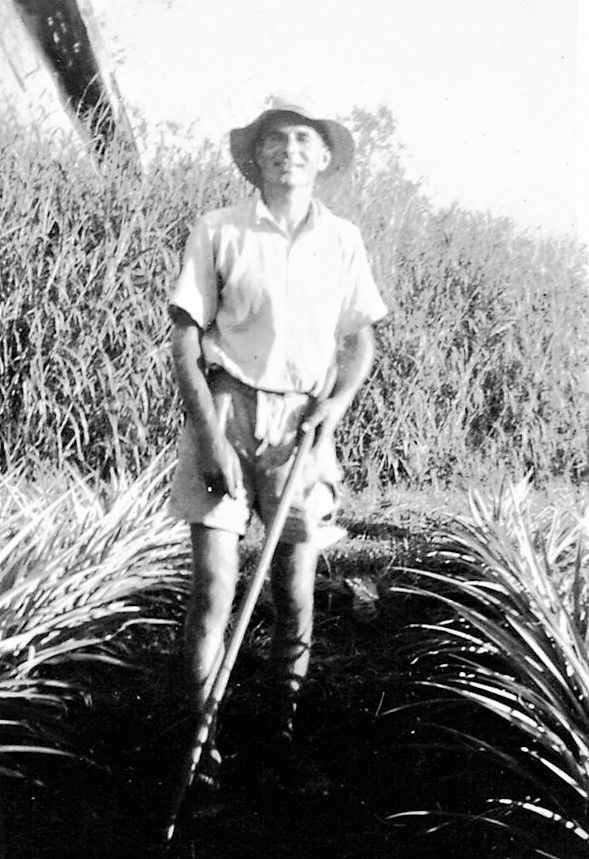 John Thompson in the pines 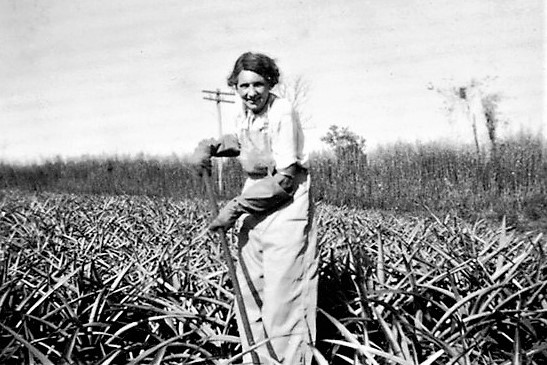 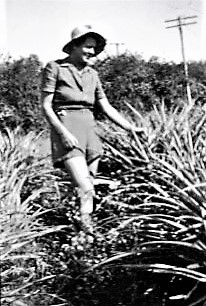 Jane Thompson in the pines 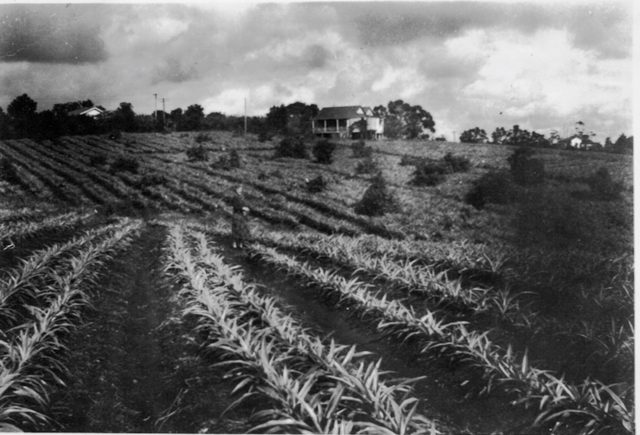 Our Montville farm with experimental avocados replacing pineapples on the far slope.

The house on the left was owned by Eleanor and Eric Dark. Eleanor was the author of “Lantana Lane.” More on them and the book later.

Life was certainly a lot different from now. My mother probably thought it was heaven to have electric lights and a phone. I remember our number was Montville 223. We were used to a party line on our Imbil property. Initially we had a kerosene refrigerator that we were constantly having to lay on its side to make it work. There was no hot water system so we had a chip heater for bathing. With a limited water supply Mum used to get in the bath first, followed by Dad. Next my turn with the water looking like soup. It is red soil country.

There was no washing machine so Mum had to light the fire under the copper boiler. The bathroom was under the house and accessed via a steep outside set of steps. When heavy rain was forecast we used to carry a large tin bath into the lounge in order to catch the leaks. This had to be bailed out in the middle of the night. We had an outside pit toilet about 50 metres from the house. This was slowly falling into the pit and on quite a lean. It faced north with great views down the valley so a nice place in winter.

My grandparents from England came to stay and were absolutely horrified with conditions. To think they had educated their son at the best dental hospital in England and to end up chipping pines and going broke. As Mum told them he was happy, he hated dentistry and loved growing things. 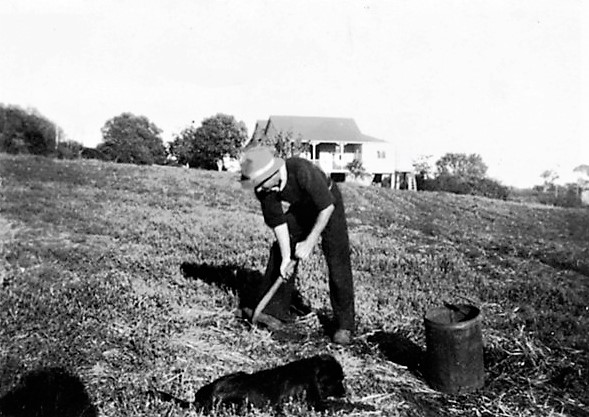 Dad had a go at growing beans. I remember the hares got most of them. Joe, the dog in the picture, died of a paralysis tick. Being an only child he was a great companion for me. Talking of hares reminds me that we always checked out the road kill. If still warm then jugged hare was a speciality. We were pretty self sufficient for most things. We ate a lot of offal including stuffed bullocks heart, brains and tongue which you could get for a song at the butchers. 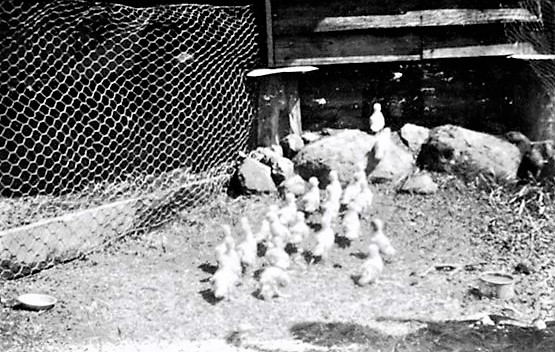 We also had a go at growing chickens, ducks and geese. Good fun but no financial reward.

I went to Montville school for just three weeks. It turned out to be a fairly unruly place. I remember the whole school getting the cuts because someone had put a live snake in the headmasters desk. The parents decided to send me to Maleny.

I had to walk out to Balmoral Road (Maleny/Montville) via the sports ground, then go for over a kilometre to the first Maleny dairy farm where I caught a truck that doubled up as the farmers milk transport. The truck used to pick up quite a few kids along the way, including the triplets Tom, Dick and Harry. The walk went through a section of rain forest where it was easy to melt into the landscape.

I used to wag school a fair bit and what is amazing, the parents never realised. I would often come home with an all over tan having no real idea what time it was, so had to be quick on my feet with excuses. 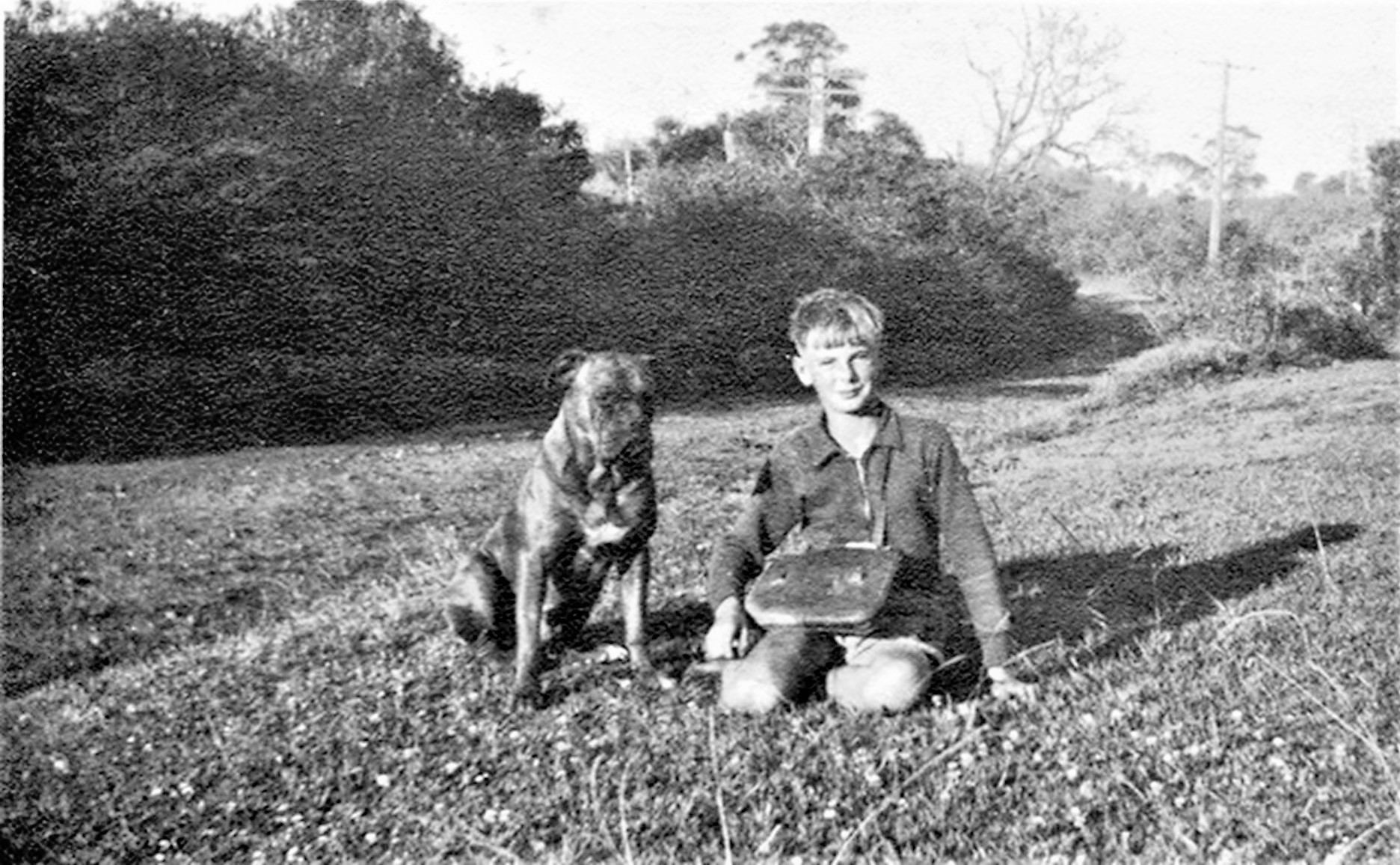 Our dog Brewer used to meet me coming home from school. Mill Hill Road in the background. We used to call it just Mill Road. The school bag looks a bit different from now days. Bare feet of course.

Brewer got his name from a Carlton United dividend. After a few weeks living in Longreach in 1947 with half the population on a bender, my mother reckoned you couldn’t go wrong with brewery shares so put a bit of spare cash into beer. 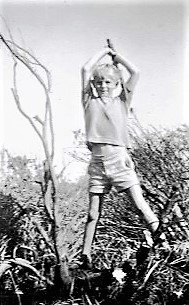 Bill working on the farm

I used to do quite a bit of work around the farm. I was good with the axe, clearing up after cyclones and replacing citrus with macadamias or avocados. 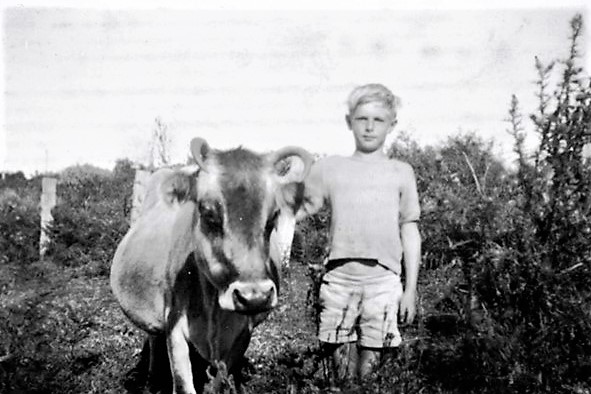 My regular job was to milk Bessie our cow, sometimes in the mornings and always in the evenings . She was  really friendly docile cow and I was  devastated  when she fell and broke her spine. The vet put her in a sling and tried to straighten her back but to no avail. Every couple of days I would do the separating to get a supply of cream and Mum used to make butter with some of it. Bessie produced enough for two families so we supplied the Darks across the road with milk. 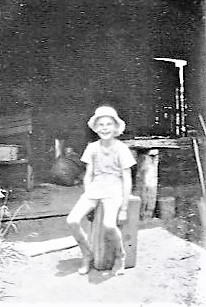 Bill in the Pine Packing shed

The shed is where we packed the pineapples for market. I used to make a lot of the cases which was quite time consuming. No cardboard cartons in those days. The cases were made of flooded gum.

Much of our social life revolved around tennis. My parents both played in Montville teams and I joined a Palmwoods team called ‘Leonta’ that was created by the Bellamy family who built a court at their place. 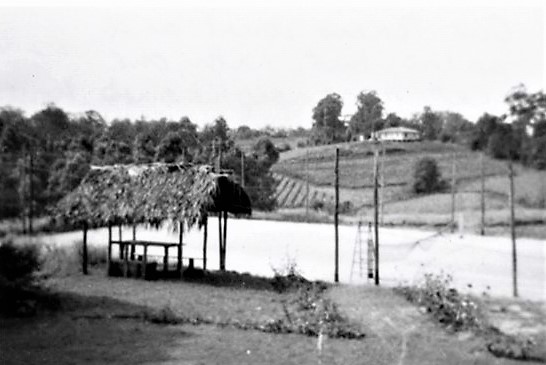 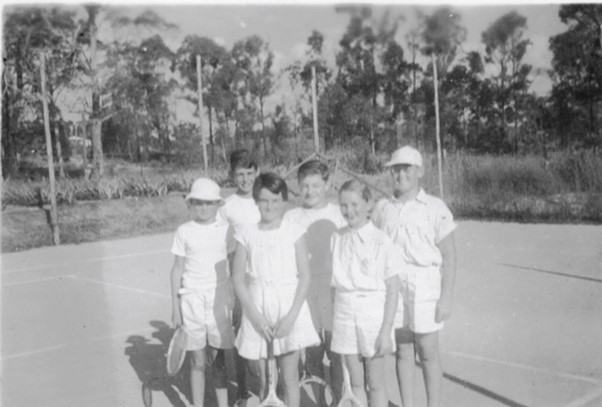 Back left is my best friend Peter West-Newman, and front right is Jane Bellamy my future and present wife

We took tennis quite seriously. Palmwoods then had 12 public courts. I remember going on a week-long tennis training course in Nambour and watching Frank Sedgeman and Ken McGregor playing exhibition matches with Segura and Gonzales. They are considered one of the best doubles players of all time. We had a court quite close to us at Montville at the sports ground, that I crossed on my way to school. I can remember it being built. I used to play a lot with Dr Eric Dark even though he was getting on a bit.

There was one character, I think his name was Mike Ward, who used to turn up on social tennis days. He used to swear like a trooper and spent a lot of time coughing and spluttering. He was a tank driver during the war and had probably been in some gas attacks. 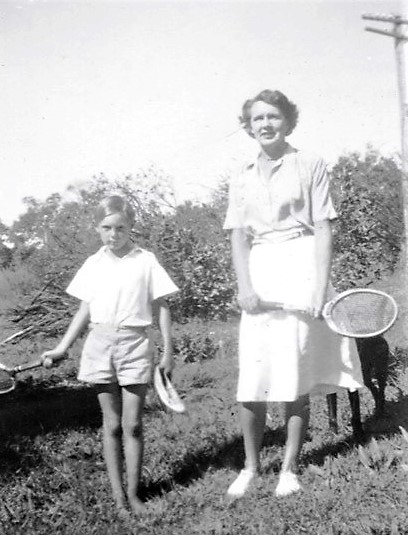 Mum and me limbering up for a game

Often at weekends we would go down to Mooloolabah to surf and sail. Sometimes this would be in the West-Newmans’ jeep, completely open to the elements and not a seatbelt in site. 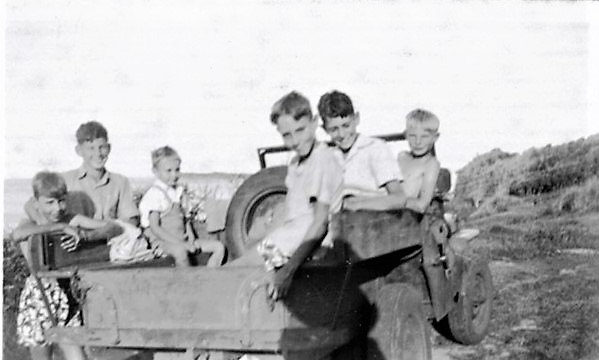 Trips to Mooloolaba Beach in the West Newmans’ Jeep

You had to swim across the Mooloolah River to get to Pt Cartwright. There was no development then between Currimundi and Mooloolaba. One day we swam over and then saw some sharks cruising in the river. We certainly made good time on the way home. 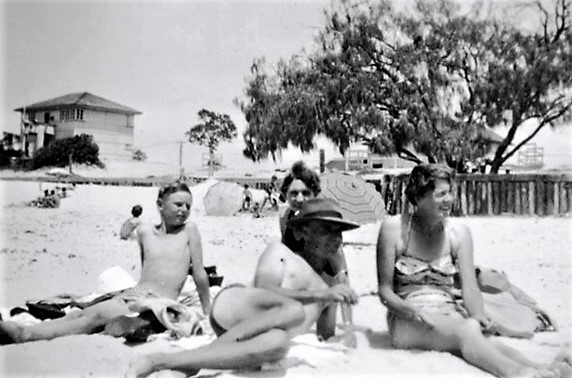 The Thompson Family at Mooloolaba Beach

One holiday we went to Fraser Island with Eleanor and Eric Dark. We travelled around in a makeshift vehicle and saw nobody for the whole week. The truck had two gearboxes that allowed us to crawl over rocky outcrops. The forests then were magnificent, growing in almost pure sand.  Unfortunately, the timber industry has destroyed most of them. I doubt if the Kauri trees (Agathis robusta) will ever come back. 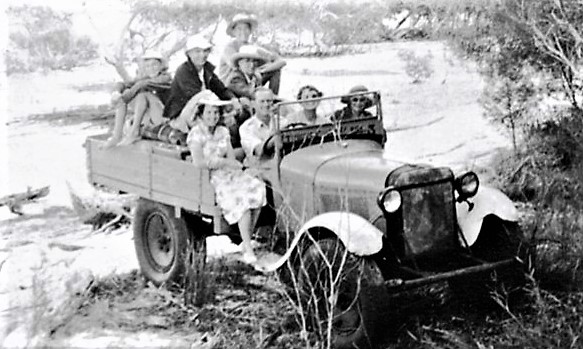 Fraser Island with The Darks

Eric and Eleanor Dark lived opposite us on Mill Hill Road. Eric Dark was a pioneer in the field of rock climbing opening up routes in the Blue Mountains, Warrumbungles and the Glass House Mountains. The Darks spent the winter months at Montville and went to the Blue Mountains in summer. They grew Macadamias. I used to make a bit of pocket money helping them harvest. They had an old corn cracking machine to remove the husks. My parents were very friendly with them. They used to get together in the evenings along with Margaret and Eric Lowe to play bridge and solve the world’s problems. Eric Lowe and Eleanor Dark were both authors. Eleanor wrote several historical novels and her last book “Lantana Lane” is very relevant to living in Montville in the 1950’s. The Lane is without doubt Mill Hill Road, and I have a letter to Mum from Eleanor Dark to prove it. There was some debate at the time of publication with some people in Buderim claiming it as theirs.

In “Lantana Lane”, I am Tony Griffith, and manage a complete chapter, “Sweet and Low”. Aunt Isabel who features a lot, is my grandmother.

The book describes an incident where my fife falls into our leaning pit toilet and its subsequent rescue and restoration. 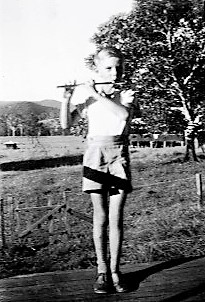 I still have the fife, but it doesn’t get played very often.

Peter West-Newman was my best friend and we often wagged school together. There was no dam on Obi Obi Creek then and it was a wonderful place to spend the day exploring rather than in the classroom. The West-Newmans lived on Balmoral Rd next to the sports ground and at the top of what was called “West-Newman’s Hill”. It was very steep and notoriously slippery in the wet. We used to ride our billy carts down the hill but I can’t recall ever getting to the bottom in one piece.

The Darks had a son Mike, who did a bit of farming towards Montville. He was a great advertisement for Landrover. He used to tow a single disc plow with his poor wife hanging on for good life at the rear.

The Glovers lived at the start of Mill Hill Road and also had a farm way down the end where a bachelor called Martin used to live in a shed. There were often koalas in the tall eucalypts near the start of the steep descent to the Obi Obi.

I think I mentioned before that despite going broke, the parents regarded their sojourn at Montville as the best time of their life.