Lighted throughout with Quirk’s Air Gas; Hot and Cold Baths……

Just two of the enticements for prospective guests at Manjalda in the 1920’s!    Manjalda was built in 1915 for Mr Fred Pickering and his two sisters, and designed to accommodate about 35 people. It stood proudly on the top of the rise next to the newly built St. Mary’s Church of England and the nearby School of Arts.  Fred was a mercantile agent on the 2nd floor of the old Union Bank Building, cnr. Queen & Creek Streets, Brisbane.  He lived at Sandgate and the two sisters ran the boarding establishment for many years.

The building was not enclosed underneath when it was first built, and the local echidnas spent a lot of time there digging up ants’ nests.  It was also a popular camping spot for the numerous cattle dogs, being near the bullockies’ main trails.  There were very few places in Montville in those days where dry dust and boarding house scraps coincided, and both these animal species left their fleas behind.  Now and again the fleas got upstairs, and Fred spent many a lively hour during his weekend visits spreading “Insectobane” and sump oil to deter the critters. 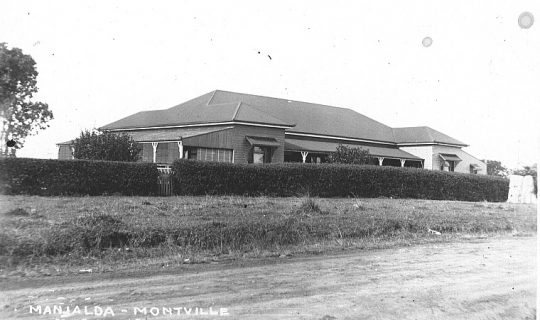 Mr & Mrs John Porter had Manjalda in the 1940’s; Mr Porter and his son Bill built the swimming pool, the pool room and extra guest rooms downstairs.  A Mrs Lloyd was on the staff from 1946 to 1950, she recalls the wages were £3.6s.9d ($6.70), with keep, for a 5½ day week.  In the early 50’s it was bought by an English woman, a Mrs McDowall, but managed by Mr & Mrs Martin, sister and brother-in-law to Margaret Farmer, when she was still Miss Margaret Casos.   Margaret worked there with her sister, no wonder she went on to manage Meals on Wheels in Nambour, as well as the legendary Montville Ladies’ Club catering! 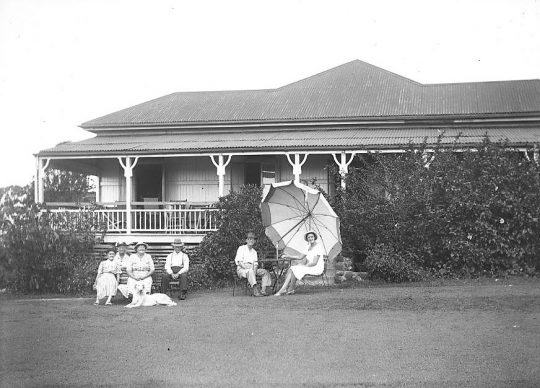 If you stayed at Manjalda you could rub shoulders with the rich and famous.  Mr & Mrs Ken Mackay and Mr & Mrs Wally Grout, well known to cricket fans, honeymooned at Manjalda, and Sir James Killen was a frequent visitor when he was still Jim, and Montville was a major convention centre, and a favourite spot for honeymooners.  The area also provided early package tours too.  One caught a train to Palmwoods and was collected by bus or car, then deposited at Manjalda to laze around the pool, go bush walking, or enjoy a day trip put on by the bus driver.  The original owner of the bus company was Bob Isaac but his successor, Eric Smith, was the man for the local tours; billy tea by the creek, and hair-raising trips over ungraded roads. 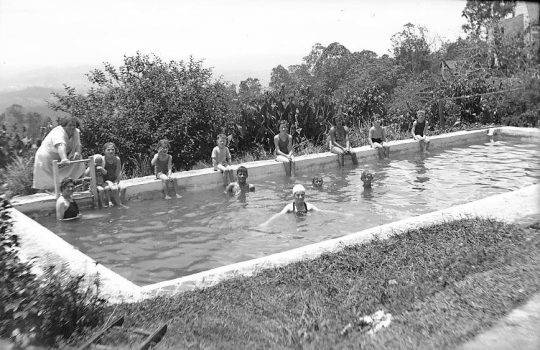 Later it was sold to the Mathers, about 1957, for £2,250 ($4,500) after an unsuccessful auction; it was advertised as taking up to 50 guests with an annual turnover of £7,000 ($14,000).  During the last Christmas holiday period before it closed in 1968, there were reputedly up to 90 guests in the building, with a tennis court and croquet lawn as well as the “pool with a view”.  There were two sittings at meal times.  Mrs Mathers was reputed to be a very good cook and doughnuts one of her specialities. 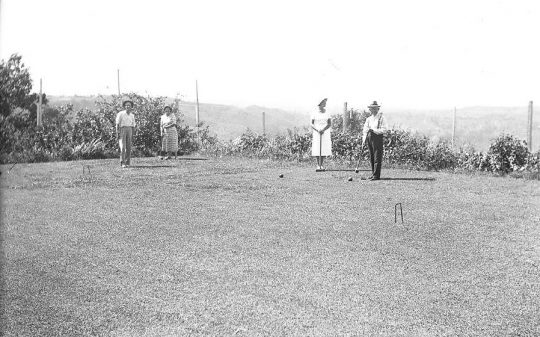 The 1960’s heralded the end of the Guest House era.  Holdens became affordable and people could travel further afield.  One by one the guest houses closed down – or burnt down!  Manjalda’s building survived a while yet.  After George Mathers’ death in 1970 it was sold to the Cully family, and subsequently to the Savilles.  One of these owners established a Maritime Museum, and there is a tale that you had to walk through a prawn trawler to get to the front door.

Gordon and Cynthia DeLisle bought the rather forlorn old property in 1974, restored much of its grandeur, and established the DeLisle Art Gallery.  Anyone who visited there could never forget walking to the end of the verandah gallery and seeing the incredible vista through the huge window wall. Tony and Joan Page were the last owners and proprietors of the Montville Art Gallery in Manjalda, from 1990 until the devastating fire on Saturday morning, August 26th,1995, which totally destroyed the building in just over half an hour.  There was no possibility of containment.  Our local fire brigades were on the scene very quickly, and thankfully were able to save the adjoining St. Mary’s Church.  Fortunately it was an almost windless morning or else we may have lost more of our historical precinct.

The Pages investigated the idea of re-building for some time, then decided to sell the site.  The Montville Art Gallery is now in what was once Edward Smith’s cottage across the road.  John Hargreaves from the Mountain Inn is the present owner and developer, and the building complex called “Mayfield” is now fifteen years old.   Written by Gillie Warren and updated in 2016