I was born in Flaxton on 10 October 1910, moving to Montville, living in various places on the front road, now Balmoral Drive, and the back road, now Western Avenue, as Dad purchased and sold properties.  I started school at 5 years of age (in 1915) at the Montville State School and left when I was 12.  I passed the Queensland State School Examination Scholarship, being one of the youngest to do so.  I was captain of the school cricket team that played Palmwoods. 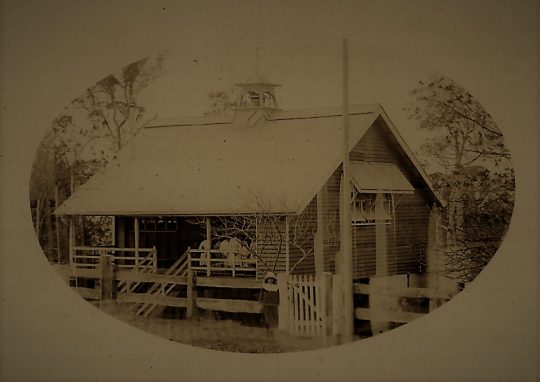 Because of the Scholarship, I attended the Nambour Rural School for a short time.  Woodwork, black-smithing and leatherwork were the subjects taken, plus general studies which I had completed at Montville.  At 13 years old, I left to help Dad on the farm growing bananas and citrus. I helped to fell scrub to plant bananas and ploughed the ground in preparation for planting pineapples.  Later I was employed by J. Allen and joined him in a partnership of cartage and beekeeping.  I left Montville in the early ‘30s and went prospecting and mining.  I returned to Flaxton where I shared a farm with Bob Isaacs.  I left and went to Ducklo on the Tara Line via Dalby to manage an apiary.  I played Rugby League, representing Dalby.  Because of travelling difficulties, I moved to Dalby where I worked as a builder’s labourer.  I moved to Bli Bli where I worked on a cane farm and cut cane on the Maroochy River.  The next move was to Gordonvale near Cairns, where I cut cane and played football representing Cairns and North Queensland in 1936 against the English touring side and again gained selection for the North Queensland touring side in 1937.  During the slack season I travelled to Biloela where at Banana Creek I picked cotton, felled and cleared brigalow scrub (acacia wooded grassland) for £1 (or $2) per acre and helped with the first cotton crop.  This was not a success as I was absent at the time when noxious weed growth developed, resulting in a poor crop.  I continued cutting cane in North Queensland until the declaration of World War II when I enlisted after the finish of the sugar season.  This was the start of a new career.

I served in the Middle East including the Siege of Tobruk, New Guinea, Borneo and Japan, finally being accepted into the Regular Army.  It was a very interesting 20 years of my life.  I had every rank from Private to Major. I was awarded the British Empire Medal for conspicuous bravery at Tobruk.  In 1995, I was awarded the Polish War Cross.

After discharge I became the North Queensland Field Officer (a new appointment) of the Queensland Road Safety Council with headquarters in Townsville.  The area extended from Sarina in the south to Cooktown in the north and Mt Isa in the west. Branches had been established at Cairns and Mackay and two more branches were established in Ingham and Ayr.  I visited these areas for their regular monthly meetings which meant driving some 40-50,000 miles a year.  I retired in 1975 when I turned 65.  I now live in Toolakea, one of the beaches north of Townsville where I grow orchids, fruit and vegetables and do some fishing and play a bit of golf.

I will now relate an experience that has a bearing on my appreciating the differing memoirs of individual participants.  At the invasion of Balikpapan (in Borneo), I was O.C. of a contingent of 26 soldiers.  Landing after the initial infantry assault we were charged with the responsibility of clearing any pockets of enemy resistance, locating mines and booby traps and to prepare the area for receipt of future supplies.  Included in my duties was the censorship of mail.  We had an operational frontage of approximately 500 yards so we were a compact group. There were a few incidents: we suffered five casualties.  The impressions of soldiers varied considerably in their acceptance and interpretation of these events.  Thus I learnt that individuals see, appreciate, describe and identify events and incidents in different ways and naturally these memories will change with the passing of time.