The story of No. 107 Western Avenue

Len and Val Gorsch always knew their home at 107 Western Avenue was pretty special, but now some of the house’s history has been uncovered, there are even more reasons to call it special.

A recent phone call to Cate Patterson, Co-ordinator of the Montville Historical Group from Kirsty Volz, a PhD candidate at the University of Queensland researching the work on an architect named Nell McCredie set the history research ball rolling.

Kirsty explained that Nell McCredie practised in Queensland between 1923 and 1925 and that her work is significant because she is one of a few practicing women architects in Australia in the interwar period. Kirsty had the blueprints of a house in Montville for L.J. Millett. Was there any chance that the house might still be standing? It was almost too much to hope for. 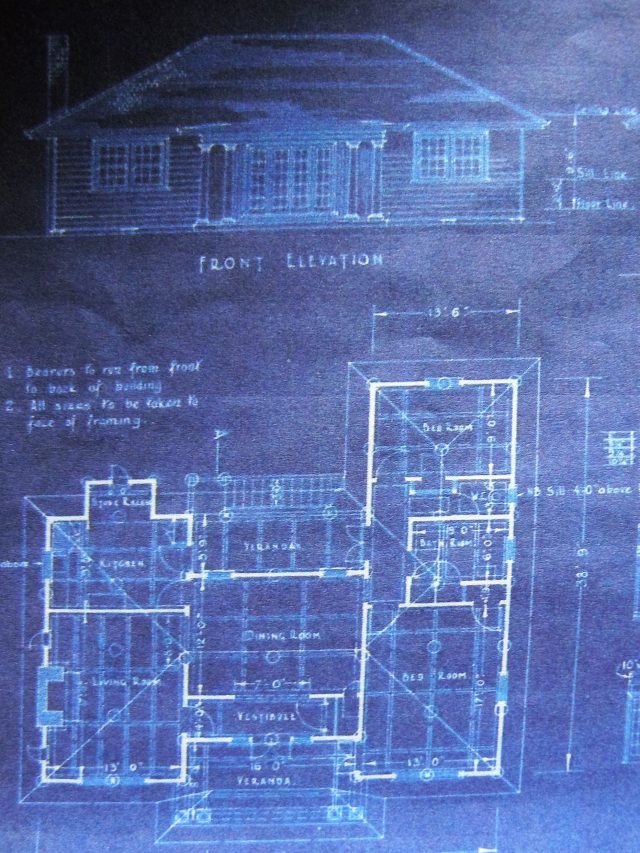 Where to start? The search began with a drive around the streets of Montville looking at every 90 year old home that matched the design plans. This was a fruitful exercise in that it showed an abundance of older homes with their own undoubtedly interesting stories, but there was no obvious match between the plans and the houses.

The next step was to take the plans to Jenny Tatton at Montville Real Estate, a veritable fountain of knowledge of all Montville homes that have been bought and sold. Jenny has meticulously kept records including family notes aerial photos, copies of Certificates of titles, plans and advertising. Her heritage folder is a treasure trove. After closely examining the blueprints Jenny thought it was similar to a house in Western Avenue, but the layout was different with no fireplace. She pondered a little longer and then recommended a visit to Val and Len Gorsch, long-time Montville residents who would know of the Millett family or recognize the house if anyone did. 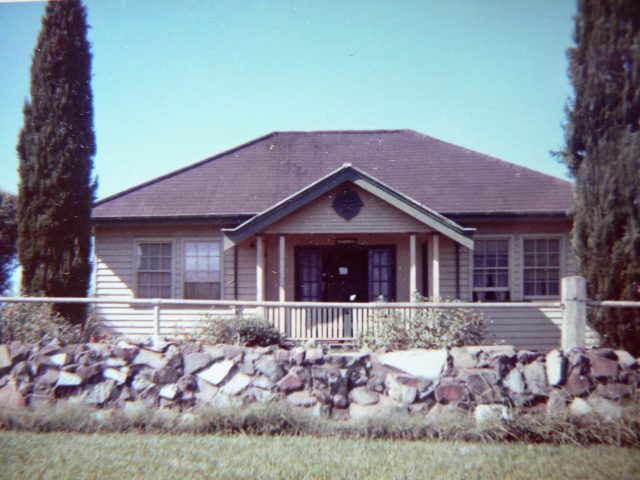 It only took Val one glance at the blueprints to comment, It looks like our place doesn’t it?” And she was right! Val went to a drawer and brought out a plan of the house she had made before she and Len made their own modifications. She had documented so much of the house’s history in that hand drawn plan and even had a photo of the house from 1956 when Len first moved into the house in August 1956 and stayed with Jim Everett learning about pineapple farming before his parents arrived having just purchased the home from Jim.

As Val took us around her home there was ample evidence of the original design – from the outside the neo-Georgian symmetry of windows framing the porch was now obvious, even though the original columns have been replaced by solid 4×4 posts. Inside, the vestibule has been opened up to create a sizeable living room replacing the original dining room. The walls still feature red cedar panels and the fibro cement panelling topped with a red cedar picture rail. 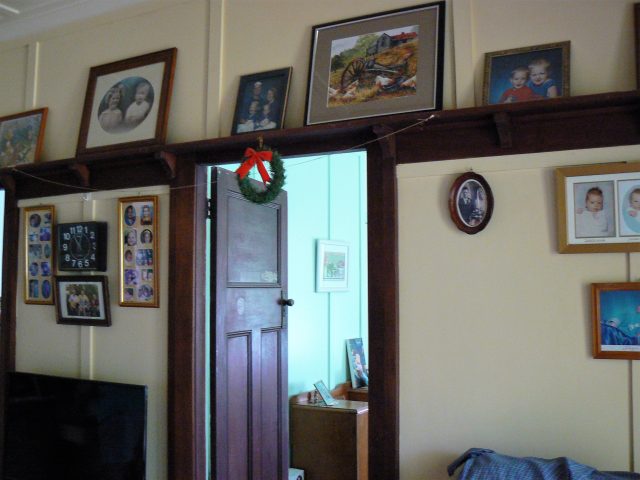 The picture rail of the original Dining Room

Although the function of the rooms has changed, the core of the house is clearly recognisable. But where the original home was built on a slope with the front at ground level and the rear of the house several ‘feet’ above the sloping ground, Len and Val’s house is on stumps – on level ground. So what has happened?

Val has a ready answer.

The house had been moved from No 203 Western Avenue, probably in the 1940s. It slid sideways off the stumps in a cyclone and years later when Val and Len had it restumped, a comment from the ‘stumper’ that it was “one of the heaviest houses I’ve ever lifted,” is testimony to how well it was built. Len mentioned that the name, Thompson on one of the roof joists suggests that it may have been built by Fred Thompson. Fred was a much respected local Montville building contractor who built ‘Belvedere’, Monty and Ethel Smith’s home (1911), the Methodist Church (1912) and St Mary’s Church of England (1914) as well as upgrading ‘Elston’.

A little time at the Department for the Environment and Natural Resources provided more information. It seems Leonard John Millett and his wife Margaret Hunter Millett purchased a 1/3 acre block in March 1928 along with the larger block of just over 29 acres from which the smaller block was cut. This land was purchased from John Clark and was part of the original 160 acres, portion 71V owned by George John Butt.

So how did the Millett couple come to know a female architect and invite her to draw up plans for their home? Nell graduated from the Sydney University in 1923 and Margaret Hunter Millett graduated in 1922. It seems reasonable that they knew each other as there would not have been many young women at Sydney University in the early 1920s.

Val and Len now know a little more of the history of their home, ‘Duoambo’ (the name Val says it arrived on the block with) and have enriched its story since Len first moved in in 1956. He and Val married in 1963 and raised their three children on their pineapple and later avocado farm. The most recent renovation to the home has been the transformation of the kitchen by their cabinet maker son, Wayde. Now 86 years later, this comfortable and well-built home is sure to meet with approval from its architect, Nell McCredie who wanted to design practical, affordable homes for everyday Australians. 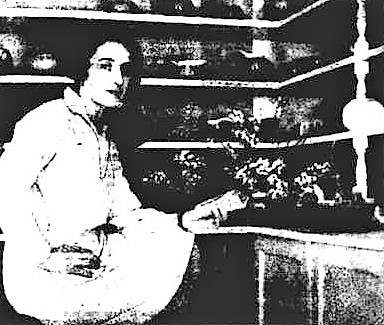 Nell McCredie in her Sydney home

Nellie (Nell) McCredie was born in Concord, Sydney on 27 May 1901. Nell was one of the earliest women Architecture graduates from the University of Sydney. She studied under Leslie Wilkinson, first Professor then Dean of Architecture at the University, and she graduated Bachelor of Architecture in 1923. Her thesis for her degree advocated simple, chaste buildings in appropriate settings.

Nell was a draughtsperson for the Sydney Harbour Bridge project before moving to Queensland. After a brief stay in Cairns, she moved to Brisbane where she worked for the Workers Dwellings Branch of the state government – which was to become their Housing Commission – from 1925 to 1929.

Only one house in Brisbane,’Uanda’ designed by Nell remains. It was a private commission in the 1920s, and is included in the Queensland State Government’s heritage listings. The listings note that Nell McCredie was concerned with improving the quality of life of the average Australian.

While in Queensland she also studied pottery under Lewis Jarvis Harvey, a noted teacher, sculptor, woodcarver and potter.

Nell left architecture around 1932 when she returned to Sydney. She operated a pottery in George Street and taught pottery at the YWCA, opening a city depot in George Street in 1933, but firing her work and the work of students at her home at 17 Stanley Road, Epping. 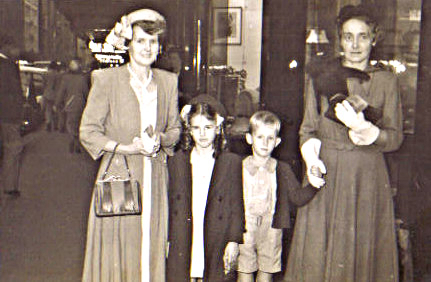 Nell on the right with her niece Hazel and children, Helen and Bruce

Around 1933 she was joined by her brother, Bob. Together they made domestic ware for supply to gift shops and restaurants. Nell also made one-off pieces, winning the Arts & Crafts Society’s Elizabeth Soderberg Memorial Award for pottery in 1947 and 1951.

About the Millett Family

John Leonard Millett was born in 1885 in Penzance, Cornwall and grew up in Charters Towers. Millett married Margaret Hunter Mackenzie on 25 June 1913 in her hometown, Townsville. He enlisted there in 1914 and was a decorated Lieutenant employed in the Treasury. After the war, the couple moved to Montville where they were active in the community. Mr Millett was a devoted Methodist and sang bass in the Church choir. He was Superintendent for the Sunday School in 1928 and trustee for the parsonage. As an accountant he put his training to good use: He was on the Road Committee (Balmoral Montville Road), treasurer (1923) and committee member for the Fruit Growers Producers and Fruit Association for several years.

Mrs Millett, a Sydney University graduate (1922) was equally involved in the community. She played the piano for Church, was a member of the Queensland Country Women’s Association. Her scones won first prize in the bake-off competition of the Wisteria Fete for the Methodist Church in 1930. She is perhaps better remembered though for a story run in the Women’s Weekly in 1951 long after she had left Montville and was living at New Farm, Brisbane. Here she is featured as the author of the ballet, “Black Swan” based on the history of Western Australia, to be performed by the Boravansky Ballet.

Margaret Millett was also one of the teachers who set up Montville’s first home schooling. This ad appeared in the Nambour Chronicle on 15 April 1932, p 6.

An article on the same page elaborates that School-work will include, in addition to the ordinary subjects, handwork, singing, and games, nature study, drawing, and needlework.

These enterprising women were also active in the Montville Community as members of the CWA and the Methodist Church in the years of the depression leading up to War World Two.

One Hundred Years of Blessings – The Montville Uniting Church 1912 -2012