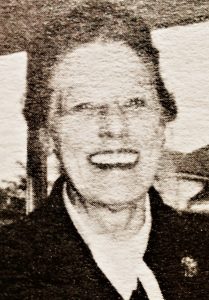 I think about early Montville as I write. When I was very small there were no cars on the Range and people went about in sulkies and buckboards. Or walked! I remember being out with my family one day when I was about three and we came across the first bullock team I ever saw. It was stuck in the red mud and a man was walking up and down beside the team brandishing a whip and shouting. I tried and tried to understand what he was saying but my sister Jean ordered me not to listen, explaining in awed tones, “He’s SWEARING!” And I daresay he was.

But I think of those big bullocks again and the crooked red mud road through the rain-forest – there was a lot of rain-forest in those days, but we called it ‘standing scrub’ with monkey vines. At the school, the horse paddock was fairly clear with a few big gum trees and a big gum log. Much of the land was felled during my childhood to make farms and orchards, and people bought cars, and the sulkies and buckboards began to disappear. Oh dear. It was a long time ago.

At the end of World War I, we were all so happy.  Bonfires were lit along the Range.  That was my first experience of bonfires and it was very impressive.  Then the men came back.  Some were fit and well, others were not.  One of my uncles was shell-shocked and another had a bad arm that he was never able to use properly again.

The roads were often muddy with metal strips here and there. School children used to love to watch the horse traffic going up and down the road (now called the Hunchy).  They were forbidden to go on the road for fear of being in the way of the horses.  That made it even more interesting!  After the new road (to Palmwoods) was built they missed out on seeing the cars.  The first car was owned by Mr Isaacs.

Oranges, bananas and later pineapples were grown.  Montville was really beautiful – especially the orange orchards.  The oranges were allowed to ripen on the trees and they looked very attractive.

When I started school in 1919, the camphor laurels had been planted along the fence.  There was a very prickly myrtle hedge where the saddles and bridles were kept.  My young sister and brother used to ride but I usually walked – about a mile along Western Road.

If you wanted to go to Palmwoods to take the train, you went in a coach driven by Owen Callaghan.  He had four horses, maybe six sometimes.  At times he cracked his whip and swore like mad to keep the horses going. They say that when he had a motor vehicle later on, he did the same but got no response.

We had sandwiches well wrapped in paper for lunch and always one or two pieces of cake that Mother had made.  We rarely had fruit.  Sometimes May Fielding gave me a double on her horse. Holidays were for most people taken at Maroochydore.  We had to go in the store wagon owned by Mr Stupart.  Uncle George had a buckboard.  He took the children in that.  It took a full day to get to Maroochydore.  The horses had to be rested.  The wagon had sides but the buckboard didn’t.  You had to ‘hang on’!

Snippets: The Thynne family had a beautiful property in the Obi Valley.  It was a wonderful place for a picnic.  Madge Ruddy was a great friend of my young sister.  Madge’s father was one of the first to have a car. The atmosphere in Montville was always very friendly and happy and safe.

The school was a small building.  As you entered the room, the Head Teacher was on the right and the Assistant Teacher on the left. The desks had inkwells.  When children first learned to write they used slates and slate pencils.  Then they progressed to lead pencils and ink and pens with nibs.  The inkwells were made of china and fitted into holes in the desks.  There were grooves for the pencils. Everyone learned by rote, especially spelling and tables.  The teaching may have been didactic but it was effective. On the walls hung wonderful maps.  There was a big map of the world rolled up.  When needed, it was hung on the blackboard. There was always homework to do.  I was in the Scholarship class and we had lessons before and after school. There were netball teams for the girls and crickets teams for the boys.  The netball court was behind the school.  The Montville teams played teams from Palmwoods and Woombye.  This was enjoyed as they got to know each other.

There was one family who lived at the end of Western Road.  The boy from this family had to work hard at home before walking all the way to school.  He was usually very tired and could not concentrate and made errors for which he was severely reprimanded by the Head Teacher.  The boy’s parents were Irish.  The Muirhead grandparents were Scottish with one grandfather from Yorkshire.  The two families tended to have disagreements.

My grandfather was under contract for logging trees and floating them down the Maroochy River and out to sea. There were fruit packing classes and competitions.  Oranges were usually used. There was a library open once or twice a week at the School of Arts.

Hazel Tully went on to become a school teacher at Brisbane Girls’ Grammar before finally becoming a journalist, working for The Sun and then as a sub-editor for the Australian Women’s Weekly.  She attended Queen Elizabeth II’s coronation at Westminster Abbey in 1953.  She died in 2009 at the age of 95.

This was Dictated in January 1996. Part of these recollections was published in Montville State School 1896-1996 Centenary History p 45.