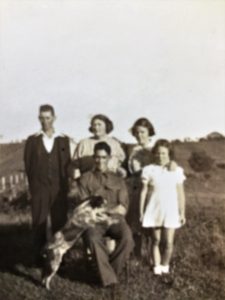 The Manley Family on their farm: Kev, Doreen, Nell, Ernie, Dell, and Bob the Second

When Doreen Wyllie married Kevin Manley on 24 August 1934 she moved from “Ellendale”, a dairy at Bald Hills to a 160-acre block along Western Avenue. Her three children, Ernie, Nell and Dell were enrolled at the Montville State School in 1935. There had been an earlier dwelling on the block but Kev set to building a new home for his instant family. He was 25 when he wed Doreen whose first husband Edward (Ted) Wyllie had died from a heart attack. She was 33. Kev was a house painter by trade and left much of the running of the dairy farm to Doreen. She was the one who placed the ad in 1936 for a boy 17 years or older who must be an experienced milker. Doreen was born into the Simpson family who ran a flour mill in Brisbane and so she was able to obtain quality grain feed for her dairy herd of some 80 cows.

Kev soon constructed a sizeable water tank and stand for the dairy. He established a day paddock, a night paddock, a dry paddock and a bull paddock for the herd. At a time when no one knew any different, Kev cleared the land using DDT and other pesticides in order to remove scrub and establish kikuyu paddocks. In fact, he wasn’t crash hot at identifying plants that Doreen had planted such as hydrangeas, poppies and her award winning hippeastrums. It would seem there was an ongoing differing view between them about Kev’s weeding and Doreen’s planting.

At the front of the yard stood a well-established fig tree – a new variety – now known as Ficus watkinsii, named for the neighbour, Byron Watkins, who had some horticultural expertise. By default, this feature tree became the defining name for the Manley property, and it is known to locals as ‘Fig Tree’.

There were numerous hens, with geese and turkeys only too eager to hiss or gobble and take a run at anyone who entered the chookyard just up from the milking shed. Sunday lunch chickens were killed on the chopping block between the macadamia trees in the front yard.

Eventually the Manleys established a citrus orchard and grew figs, persimmons and monstera deliciosa – even though none of the family really liked them except Kev.

The home itself, had two bedrooms and a sleepout all to the left of the central hallway. Doreen’s favourite colour was mauve and so the main bedroom walls were mauve along with the curtains. (Years later with the children grown and gone, Kev established the western side of the house as his own bedroom and office. By 1966-67 he was Master of the Montville Lodge and kept his robes and paperwork in his inner sanctum. It was out-of-bounds for the grandchildren.)

The Manley Farmhouse had a built-in linen cupboard and sizeable pantry. The phone hung on the wall beside the linen cupboard.  The house featured a separate dining room and lounge room off to the right from the hall. Then there was the kitchen with an alcove on the eastern side for the stove. The back-kitchen door looked north over towards a future Kondalilla Falls Road. There was a view to the sea and Mount Ninderry.

At the back of the house yard Kev built a separate tool shed and laundry. Beyond the house yard Kev built the milking shed for 6 cows with a separator room at the east end. Down wind and well away from everything a piggery was established. After the cream was separated, the milk was taken to the pigs using a horse and slide. When electricity was connected, an underground pipe took the milk directly from the dairy to the piggery.

The pedestrian entrance ran from Western Road through a gate beside the creamery that was built at the front of the property for convenient collection of the cream urns. A jasmine vine was planted over the creamery to ensure the cream remained cool. It became a prolific vine covered in green foliage and pink blossom. A short path led to the front steps and verandah. In the front gardens Doreen planted hydrangeas.

A row of tinted glass casement windows along the western side could be opened for air flow and light but did not allow too much heat to enter the house.

At a recent visit to the house, Doreen’s grand-daughters expressed their own pleasure at its tasteful renovation and claim their grandmother, Nan, would have approved of the generous proportions of the entertainment room and would have thought she was a real queen living in this beautiful home. The integrity of the home has been retained despite four sets of owners placing their own imprint on the story of what has come to be known as ‘Figtree’.

Today the house warmly evokes a genteel farmhouse quality. The ‘lawyer white’ paint of the tongue and groove walls seamlessly unites the newer extensions with the original home. When the property was purchased in 2008 there was a long narrow lounge room and large deck that had been added to the back of the house beyond the kitchen. By extending this room and incorporating part of the deck, a spacious and inviting entertainment room welcomes visitors. The main entry to the house is now from the western side with an added-on verandah. The main bathroom is an internal room with a skylight. Its cedar framed bath is an indulgent treat for guests.

Doreen loved entertaining and many morning and afternoon teas were held for members of the CWA, the Bowls Club, friends, neighbours and family. Doreen loved the grand dinners of the Masonic Lodge events. Kev entertained with his accordion and although he was a heavy smoker managed to stop for 10 years before taking it up again when he decided he was putting on too much weight.

The upcoming marriage of daughter, Dell, to Les Harper in 1955 prompted Kev to subdivide some of his land. About 60 acres west of the farmhouse were given to their son, Ernie where he grew pineapples and a small house block was cut off for Dell and Les, and Kev built a modest cottage which today stands largely as it was almost 65 years ago. Here, Dell and Les raised their two daughters Sue, born 1956 and Anne born 1958. Together they worked the farm alongside Kev and Doreen for many years.

In about 1977, a portion of the farm was sold to the Donoghues. In August 1980 Doreen passed away and Kev died in August 1982. Dairy farming on Montville was coming to an end. Their neighbour Vince Sinclair sold his dairy farm soon after.  The following year, in 1983, a new subdivision was created along what came to be called Manley Drive. It is a fitting tribute to the Manley Family who lived and worked in Montville, an integral part of its fabric, for almost fifty years.